Breast Augmentation - 3 Typical Reasons for Going Under the Knife

Breast enlargement remains the most popular cosmetic surgical procedure and patients love the results. The majority of women requesting breast enlargement fall into one of three typical groups:

1.       The first group are young women with relatively small breasts, who would like to go larger to enable them to wear their choice of clothes, and feel more confident with their bodies.

2.       The second group are young women with normal breasts who simply wish to have larger breasts.

3.       The third group are those ladies whose bodies have suffered the ravages of childbirth, resulting in smaller emptier breasts –especially in the upper part of the breast which becomes relatively empty. This third group tend to be more conservative and do not want their breasts to made much bigger but are looking more for a restoration of breast shape.

Ladies do occasionally request this procedure for other reasons; for example one breast may be larger than the other; or the breast shape may not be quite normal and a simple implant procedure can help reshape the breast. 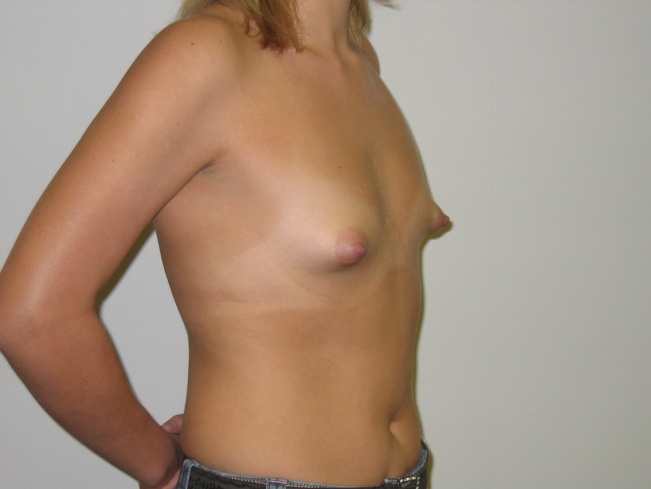 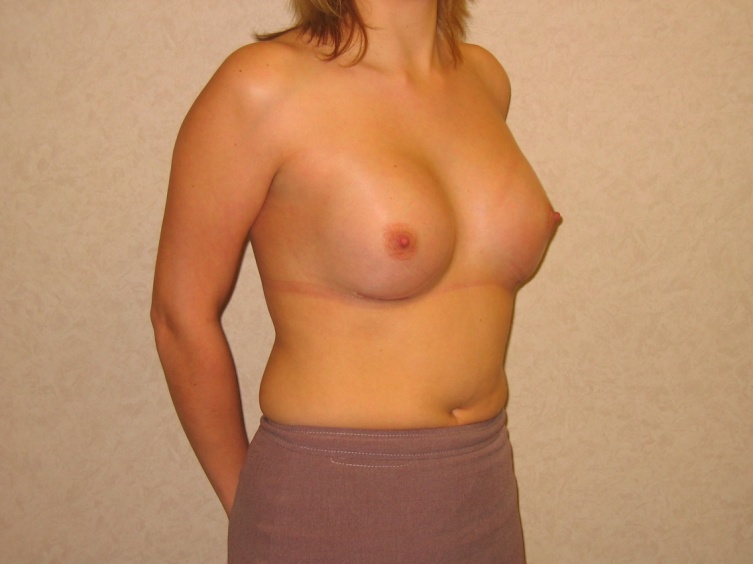 There are a number of important considerations that should be taken into account by patients considering a boob-job:

Breast implants can be inserted through incisions in different sites. Often this choice is determined by the surgeon according to which he/she feels most comfortable with. Most well trained surgeons are able to use any approach, but each approach has advantages and disadvantages:

1.       Armpit scar: Using a scar in the armpit means there is no scar on the breast at all, which is of course great. Unfortunately though, using this approach makes it very difficult to create the pocket low and centrally enough and the final result often disappoints because the implants sit too high and too lateral on the chest wall. Furthermore, it is more difficult to accurately control bleeding which may in turn increase the chance of developing a 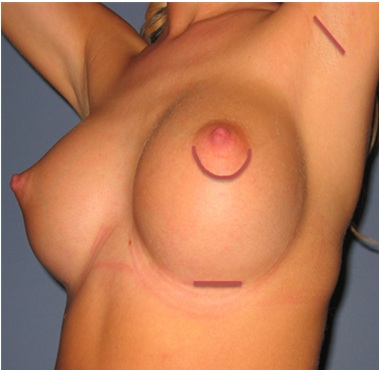 2.       Areolar scar: this approach is good because the resultant scar is well hidden at the junction of the dark areola and the paler breast skin. The drawback with this approach is that the nipple ducts often contain a normally harmless bacteria called Staphylococcus Epidermidis. This bacteria has been implicated in up to 80% of capsular contractures. Most surgeons now seal off the nipples during surgery with a plastic adhesive dressing, but this cannot be done with the areolar scar approach. Therefore there is a higher risk of capsular contractures with the areolar scar technique. Furthermore, cutting around the lower half of the areola is more likely to damage the nerves to the nipple and result in numb nipples.

3.       Crease scar: This approach does leave a scar on the breast, but if done accurately, leaves the scar exactly in the crease underneath the breast, where it is well hidden and settles nicely. It allows great access to create the pocket exactly where required and to control any bleeding. The nipple can be sealed off during surgery which minimises the chance of contaminating the implant with Staphylococcus Epidermidis.

Belly button scar: (also known as the TUBA, or Trans Umbilical Breast Augmentation) Some surgeons have used a small cut placed in the belly button to insert the implants. This means no scarring on the breast. This approach is only possible if saline implants are used (see ‘Saline vs silicone implants’ below). The empty implant is rolled up like a cigar, inserted through the scar and pushed up into place on the chest. Once in place the empty implant is then inflated with saline. However, using this method, it is very difficult to control the position and shape of the pockets, and to control any bleeding. Thus patients having a TUBA often end up with asymmetric breasts or a very wide cleavage. 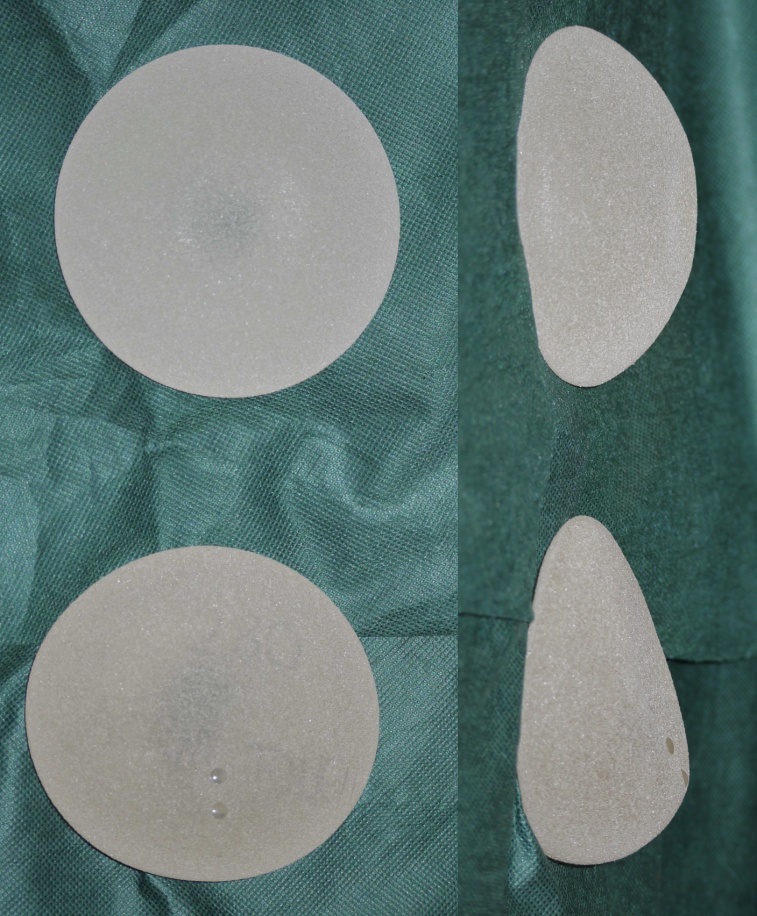 Fig: top 2 are round silicone gel implants and bottom 2 are tear-drop shaped implants

There are 2 basic shapes of implants available; round implants or tear-drop (anatomical) implants. In general, round implants tend to provide more filling in the upper part of the breast. Thus if the goal is to provide upper pole fullness (for example in cases of breast shrinkage after childbirth) or to obtain a rounded fuller breast, then round implants would be preferable. Round implants are also a good choice for most patients who have a moderate amount of natural breast tissue where the aim is simply to make the breasts bigger and not necessarily change the shape of the breast. 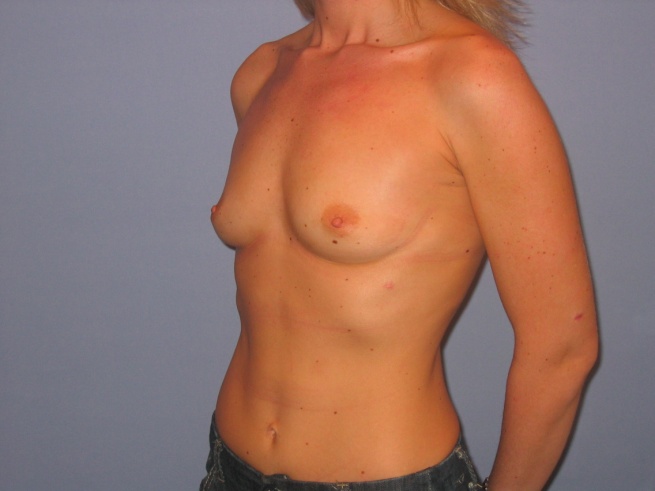 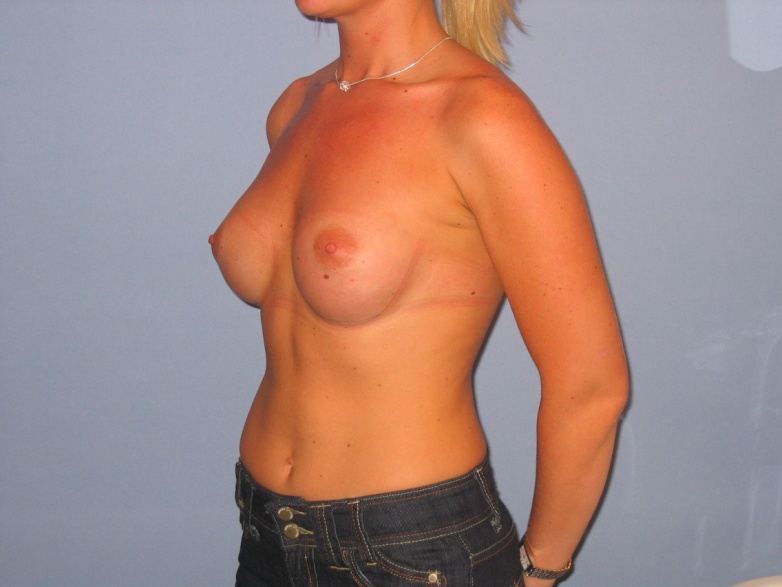 Fig: Upper 2: Pre and post op breast augmentation with round implant – note the increased fullness in the upper breast 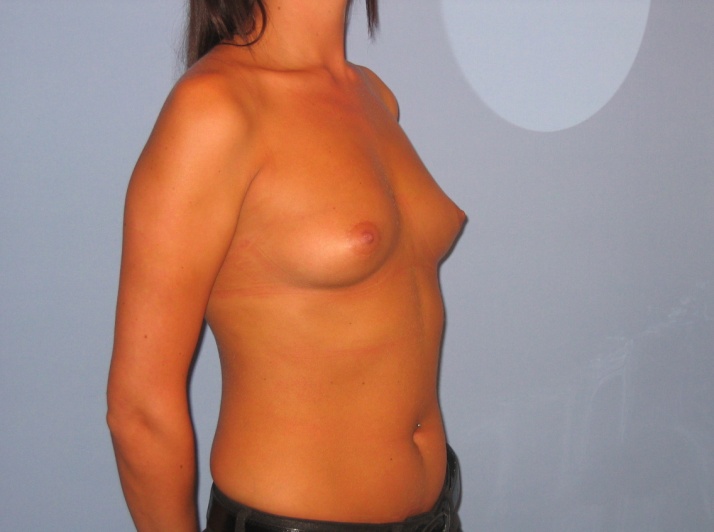 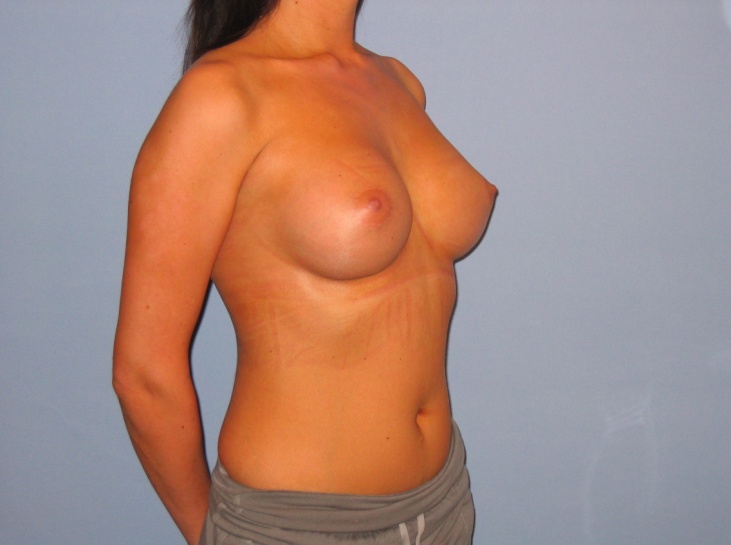 Tear drop shaped implants are better suited to those women with very little natural breast tissue, who wish to achieve a very natural final result. The disadvantage of tear-drop shaped implants is that occasionally (2 or 3 in every 100) the implant may rotate and deform the shape of the breast.

All breast implants consist of an outer envelope made from silicone rubber, and an inner filler material. There are now only 2 filler materials available:

Saline: Saline (salt water) is a poor quality filler, it feels too soft and liquid, like a bag of fluid, and implants filled with saline generally tend to slowly deflate. As they deflate they develop ripples or folds which may be felt and often seen through the breast skin. They have never been popular in the UK, and only gained popularity in the USA after the temporary withdrawal of silicone implants.

Silicone: Silicone gel most closely resembles the consistency of natural breast tissue and is the implant filler of choice of the vast majority of breast surgeons in the world.

There is a long answer and a short answer to this question.

The short answer is ‘yes’ implants are safe – there are no long term general health consequences to having silicone implants inserted.

Due to the problems experienced with the second generation of implants, by the end of the 1980’s it was alleged that up to 154 symptoms, including connective tissue diseases, were associated with silicone gel breast implants. At the time of the legal challenge, there was a lack of data to demonstrate the safety of silicone gel and this resulted in a global settlement by the silicone implant manufacturer Dow Corning in 1992. In the same year, the American FDA recommended a voluntary moratorium on the use of silicone gel breast implants in America. In the UK the same issue was investigated and in 1992 the Independent Expert Advisory Group found no evidence for an association with connective tissue disease and recommended that silicone gel implants continued to be available. The French Ministry for Health reached the same conclusion in 1996. In 1998 a further review by the Independent Review Group in the UK confirmed that there was no evidence for any long term health consequences with silicone gel implants.

This is probably the most difficult part of the decision making process; there is very often a dilemma between going too big and not going big enough. Unfortunately, due to the vagaries of the human body, it is not possible for surgeons to predict accurately what sized implant will create a particular cup-sized breast. For this reason, no surgeon will ever guarantee what the final cup size will be. Therefore, it is well worth taking time to decide upon implant size.

Selecting the implant size starts with establishing what cup size a woman currently is and roughly what cup-size a woman would like to become. As a crude rule-of-thumb, each 100-150g of implant will increase the bust by one cup-size.

I like to use a combination of methods to determine the most appropriate implant for a patient. In my experience, most people are not sure what a C, or a D or DD cup looks like. In order to determine what volume would be acceptable I always undertake trial sizing. This involves wearing a sports bra of the size that the woman thinks she would like to become, and then inserting a series of progressively larger implants until the desired outcome is achieved. Once an idea of volume has been established I take a series of chest wall and breast measurements to determine the best implant dimensions to achieve the desired shape. 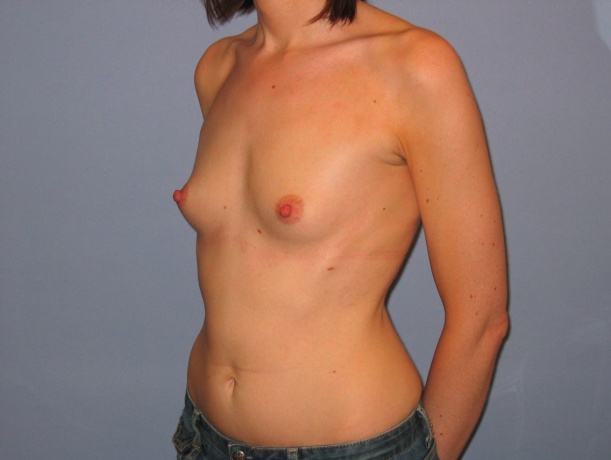 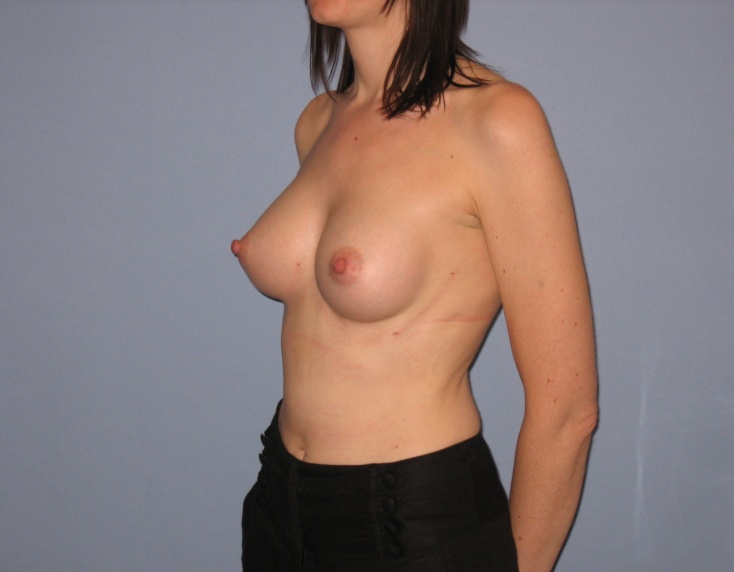 Breast enlargement Birmingham surgery is generally a simple, safe surgical procedure, which produces predictable results. As with any surgical procedure it is wise to choose your surgeon carefully and to spend time thoroughly discussing the above issues so that you end up with the result you hoped for.

·         Push up bras/chicken fillets: A well fitted, styled bra can create a full cleavage look, whilst ‘chicken fillets’ can boost the apparent size of the breasts by up to 2 cup sizes

·         Herbal remedies; unfortunately there is no reliable herb, drug or medication which can enlarge your breasts naturally.

·         Vacuum system (BRAVA); this is a suction device which is worn inside a bra for several months and which ‘sucks’ the breast resulting in an accumulation of fluid within the breast. This can produce a very mild swelling of the breast but the effect is very short lived (hours/a day or two)

·         Macrolane. A clear gel is injected into the breast to boost the volume. This can be done with the patient awake and the patient does not need to stay in hospital. The limitations of this method are that only a small volume (less than a cup size) can be injected, the procedure needs to be ‘topped-up’ after 6 months, and the gel lasts for about 3 years so that the process needs to be repeated every 3 years. This is costly and the procedure can be very uncomfortable.

·         Fat grafting. Living fat cells can be gently liposucked from one site on the body (typically bum, tum or thighs) and injected into the breasts. This is a very promising technique and one which I have been using for several years in combination with other surgical procedures to reconstruct breasts after breast cancer surgery. However, the safety of this technique in cosmetic breast enlargement has not been established. The main concern about this technique is that the injected fat cells (stem cells) may interfere with normal breast cells and may stimulate the development of a breast cancer. Therefore, at the current time this technique should not be considered until this has been further investigated.

An Overview on Breast Enlargement

How to Decide on Implant Pocket, Shape and Volume